How to Help Your Children Deal with Their Emotions 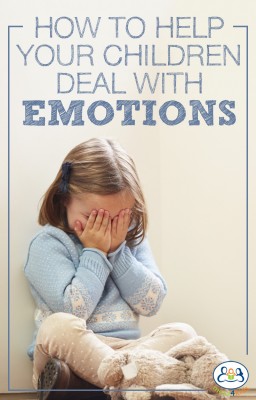 Sometimes, even though most people probably wouldn’t admit it, we all want to revert to childhood for just a few brief minutes and have an epic tantrum. Screaming, crying, kicking our feet, and getting out all of our pent up frustrations.

Then, it would simply be over – just like with a child’s typical tantrum.

Unfortunately, life isn’t that simple. Adults must learn how to control their emotions and respond appropriately. Failure to do so could result in harsh consequences. An angry motorist, filled with road rage, can either take a deep breath and keep driving or, as happens in some situations, lose his temper and become violent.

Recognize emotions. Young children must learn to differentiate their emotions. You can help your child do that by recognizing his emotions. Maybe he’s crying because he had to leave the park. “Are you sad because we have to go home?” you may ask him. Or, if he becomes belligerent because you turned off the television for the evening, you may want to say something like, “You’re upset because TV time is over for the evening.” With time, your child will be able to recognize his own emotions, one of the most important steps in learning to deal with those emotions.

Talk and listen. What may be traumatic to a child may not seem traumatic or even like a big deal to adults. Your child may have lost sight of you for the first time while at a crowded park and panicked. You, however, may have seen the whole thing and rushed over to comfort your child. Those brief moments when your child thought he was lost can be traumatic.

Instead of merely glossing over the situation, talk with your child about what happened. Ask him how he felt and listen to him. You may even want to offer an example of a time when you felt frightened when you lost sight of him.

Remain calm. You’re a parent. You get frustrated and stressed, especially when you ask your child to do something (over and over again) and he doesn’t comply. For example, you may have asked your child to put his jacket on or maybe you told him it’s time to leave the park, and either way he just doesn’t want to listen and instead argues with you.

Show alternative options. Your child may start pounding his feet on the floor or stomp up the stairs when he’s angry or he may begin yelling or screaming. Show your child that there are alternatives to reacting emotionally when he’s angry. For example, when he becomes angry, suggest that he take a deep breath and count to 10, run around around the backyard, or even punch his pillow, anything that will help him get out his anger in a safe manner.

Say I’m sorry. As parents, we all – at one time or another – get angry and lash out at our children, even if they haven’t done anything wrong. In such a situation, explain to your child that it wasn’t his fault and apologize. Seeing you take responsibility for your own emotional reactions will teach your child several important lessons:

·       We are all responsible for our own actions and, when we say or do something wrong, we should apologize.

·       It isn’t his fault you got mad. When you lash out at your child, he’s going to think he’s done something wrong even though he hasn’t, which could hurt his self-esteem.

Be positive. When your child responds appropriately to a situation, praise him. Tell him how proud you are of him. Maybe his friend wouldn’t share her favorite toy with him then pushed him when he tried to take it. Instead of pushing back, he picked up another toy to play with instead. Acknowledge you are proud of his response.

Explain that emotions change. Your child may feel sad now and be happy an hour from now. To him, that sadness may seem so overwhelming he doesn’t realize it is going to pass. The Ocean, a powerful eBook you can share with your child, will allow you to help your child calm down on unsettled days by comparing emotions to the ever-changing ocean. Like the ocean, which may be calm or unruly depending on the season and the day, emotions, too, come and go.

The Ocean will allow the calmness to flow and used in conjunction with The Bubble, your kids and even yourself will learn not only how to return to calmness, it allows them to create their own emotional protection to reduce future tantrums.